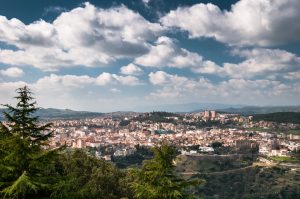 Diners at Arco often ask about where we grew up. Sardinia isn’t as well known as other parts of Italy, and because it’s an island, has held onto the old ways longer than most other places.

Our hometown of Nuoro, in the region of Barbagia,  is known as one of the most traditional areas in Sardinia. The mountainous landscape and isolated location have shaped our cuisine, which is characterized by hearty, rustic dishes made with locally sourced ingredients.

One of the most iconic foods of Barbagia is pane carasau, a thin, crispy bread made from durum wheat flour and water. Pane carasau is traditionally baked in a wood-fired oven and can be stored for long periods of time, making it a staple food for shepherds who ranged through the mountains with their flocks. Now it is eaten by everyone on a daily basis, and used in casseroles and soups as well.

Pasta dishes are also a staple of Nuorese cuisine, with the most famous being culurgiones, a type of ravioli in shape of a head of wheat,  filled with mashed potatoes and mint. Another staple is malloreddos, made simply with semolina flour and water. We serve both of these at Arco.

Desserts in Nuoro and Barbagia often feature local ingredients such as honey, and almonds.. One of the most famous is sebadas, a fried pastry filled with local cheese and drizzled with honey. This is the most popular dessert at Arco.

Nuoro is known for its production of sheep’s milk cheese, with pecorino sardo being the most famous. The cheese can be served young and soft, but is often aged for a sharp and tangy flavor.

The novelist and poet Grazia Deledda, who was awarded the Nobel Prize for Literature in 1926, is from Nuoro, as is writer Salvatore Satta, who was known for his portrayals of Sardinian rural life.

Nuoro has a long history of emigration, with many of its residents moving to the United States and other countries in search of prosperity. Those of us who have left, maintain our culinary traditions at home and many of them find their way to Arco.